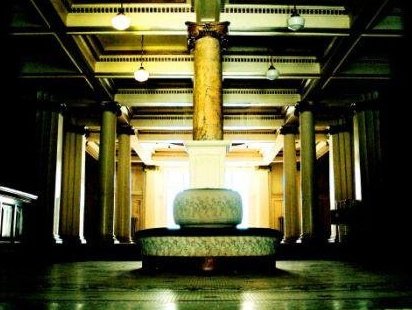 Portrait of Frances in 1919

Born in September 1884 in Ohio, Frances and her siblings grew up with their parents James and Dollie Geddes in Joplin, and at one point, lived at 301 S Sergeant in what is now the Murphysburg Historic District.

A Quashed Elopement  –  Several biographical books (and Joplin folklore) claim that Howard Robards Hughes (the father of the infamous Howard Hughes, Jr.) lived in Joplin while working in the mines but did not strike it rich.  He did however come away with knowledge of drilling techniques which he later put to use as the foundation of the Hughes family fortune.  It is reported that Hughes (age 31) attempted to elope with Frances (age 16) but her father intervened!  Three months later Hughes left for the Texas oil fields.

Frances Marries Arthur Bendelari   –  On December 21, 1903, Frances married Arthur Bendelari, who built The Olivia Apartments at 320 S. Moffet.  He was president of Eagle Picher Company.  The couple lived in apartment 104 at the Olivia, which was described as the “handsomest apartment house in the West.”

Professor Leib was a Kansas City composer, soloist, teacher, and choral director often referred to as the “dean of Kansas City’s music world.”  He resided in Kansas City from 1881 until 1915.  Upon returning to Joplin, he gave music lessons at 106 ½ West 7th Street.  He passed away on March 4, 1923 and is buried at Joplin’s Fairview Cemetery.

Singing Career  –  At 34-years old, she was the first to publicly sing the song “In Flanders Field” on July 16, 1918.  The song was adapted from a poem written by Lieutenant Colonel John McCrea of Montreal.  The poem was written as a memorial to “The Great War” (1914 to 1918) which later came to be known as World War I.  The music was composed and published by William H. Leib, who most likely gave Frances the honor because she was his student. 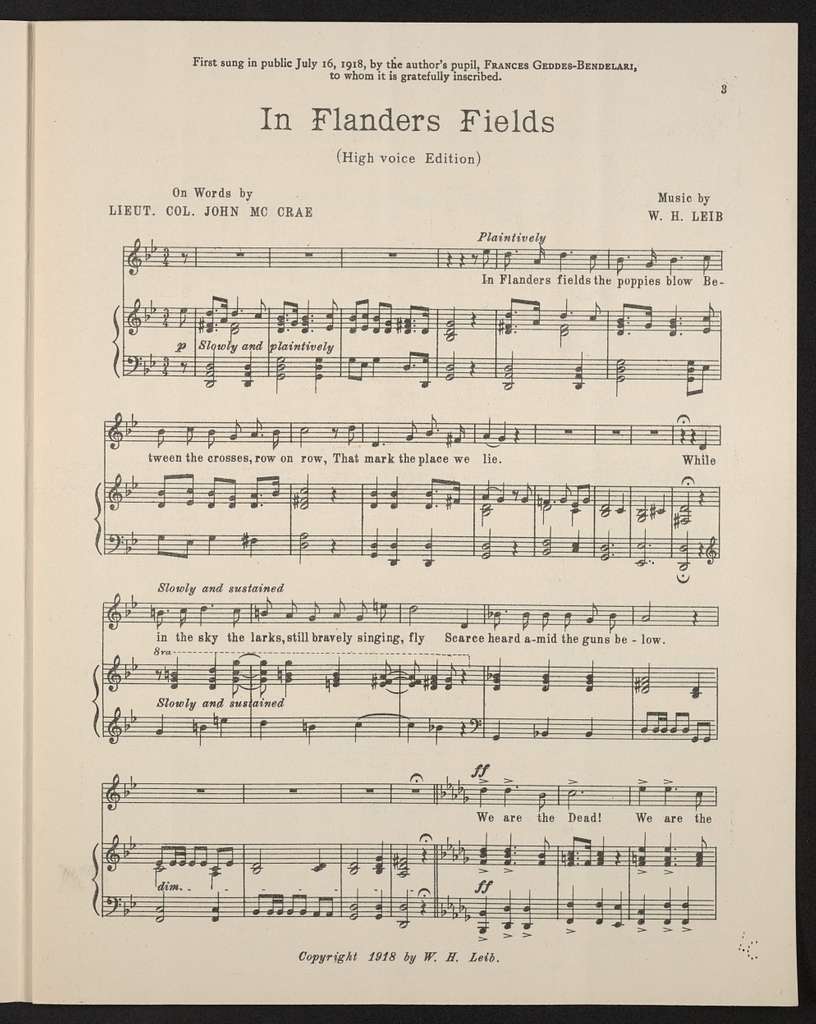 According to various newspaper accounts, Frances was described as a society leader in Joplin, a prominent vocalist, a well-known Joplin musician, and a soloist.  She studied music in New York and Joplin.  Frances performed with the Music League of the People’s Institute in New York and with the Minneapolis Symphony Orchestra when they staged a concert in Joplin in 1944.

Frances eventually moved to California (possibly to pursue her singing career or Mr. Hughes?) and was living in Hollywood in 1947 when her mother, Dollie Geddes, died at Frances’s home.  Frances died on February 19, 1977, in Los Angeles, California at 92 years old.  At some point, she took back her maiden name.  It is believed that Frances had no children.

In Flanders Fields, the poppies blow
Between the crosses, row on row,
That mark our place; and in the sky
The larks, still bravely singing, fly
Scarce heard amid the guns below.

We are the dead. Short days ago
We lived, felt dawn, saw sunset glow,
Loved and were loved, and now we lie,
In Flanders fields.

Take up our quarrel with the foe:
To you from failing hands we throw
The torch; be yours to hold it high.
If ye break faith with us who die
We shall not sleep, though poppies grow
In Flanders fields.