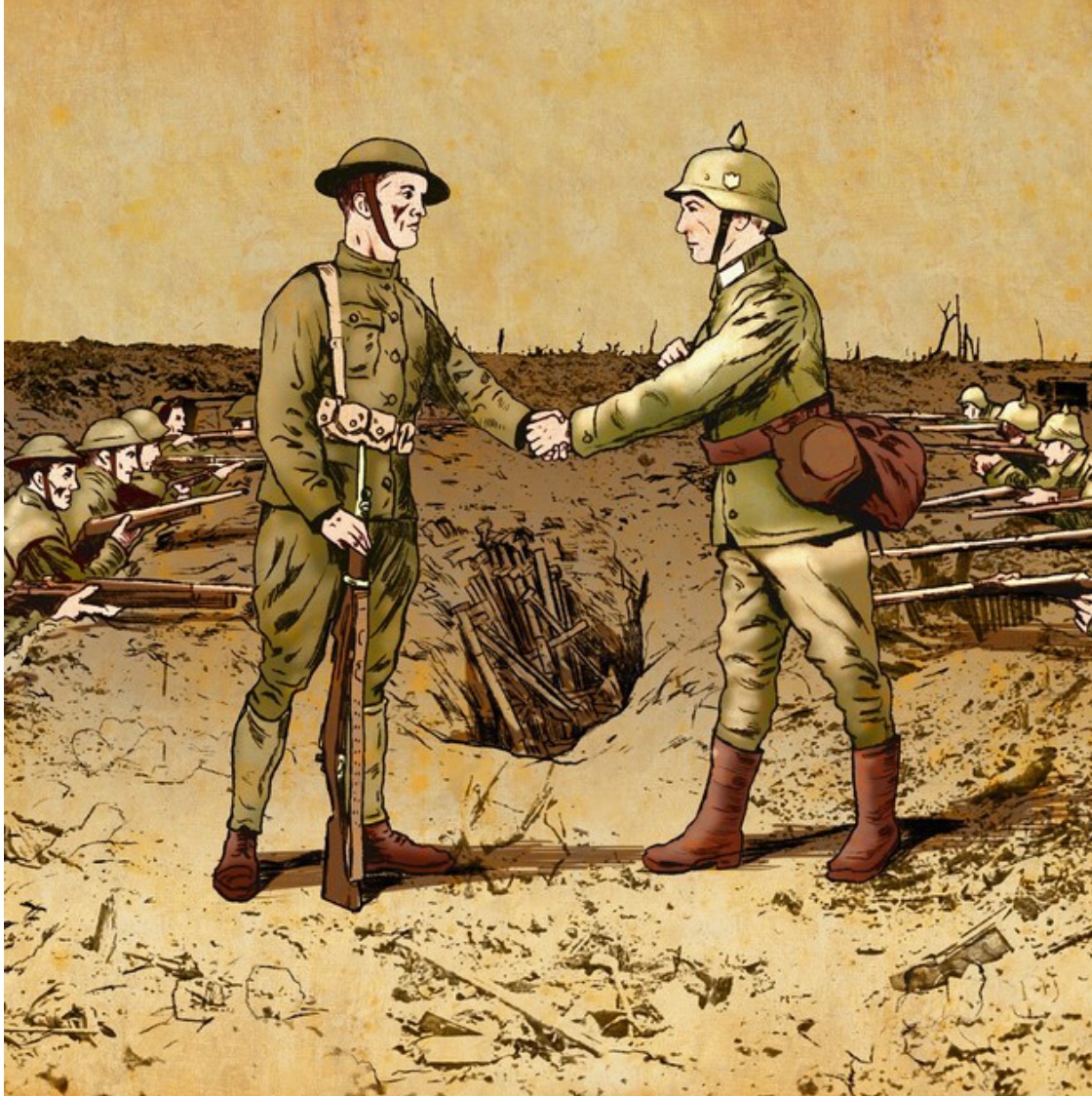 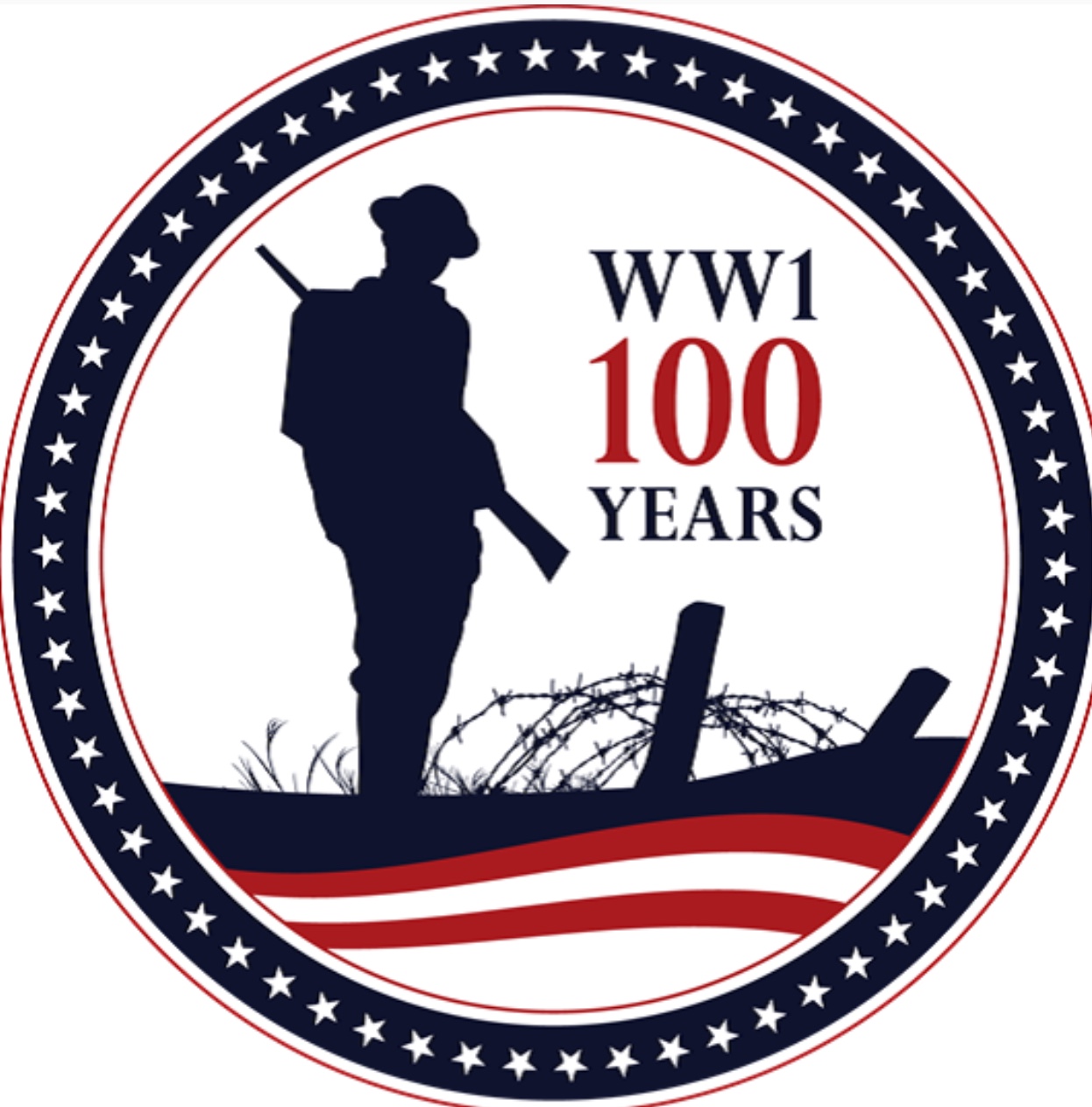 The Christmas Truce of 1914 is often celebrated as a symbolic moment of peace in a violent war. The true spirit of Christmas prevails with Men from the Royal Dublin Fusiliers meet their German counterparts in no man’s land somewhere in the deadly Ypres Salient*, Belgium, December 26, 1914.  So, it began “Live and Let Live” the unofficial peace truce.

Wilhelm, German crown prince, had Anna Sorensen, an opera singer from the Berlin imperial Opera Company serenade the German troops who are dug into a trench so close at hand that the two sides are within earshot of each other.  Germans have a crazy idea. They pick up one of the Christmas trees they have in their trenches and bring in in the middle of the no-man’s land, located in Ypres Belgium. The Scots only a few hundred feet away, chime in with a bagpipe serenade. Heads pop up from the trenches, and when it looks safe, the soldiers pull themselves into view. Brokered by the German, French and Scottish officers, a truce is declared. During the first Christmas of the Great War, enemies were brothers for one magical Christmas eve night in the trenches of the bloody War.

As cares of being shot faded away, the legend begins of a match played between the British and the Germans—which the Germans claimed to have won, 3-2.

Soldier stories reflect in letters to home that for just one day, across the front, men from both sides emerged from the trenches and met in No Man’s Land to exchange gifts and play football.

Captain Robert Patrick Miles, King’s Shropshire Light Infantry, recalled in an edited letter that was published in both the Daily Mail and the Wellington Journal & Shrewsbury News in January 1915.

*Please note :  A salient, also known as a bulge, is a battlefield feature that projects into enemy territory. The salient is surrounded by the enemy on multiple sides, making the troops occupying the salient vulnerable.

“Friday (Christmas Day). We are having the most extraordinary Christmas Day imaginable. A sort of unarranged and quite unauthorized but perfectly understood and scrupulously observed truce exists between us and our friends in front. The funny thing is it only seems to exist in this part of the battle line – on our right and left we can all hear them firing away as cheerfully as ever.

The thing started last night – a bitter cold night, with white frost – soon after dusk when the Germans started shouting ‘Merry Christmas, Englishmen’ to us. Of course, our fellows shouted back, and presently large numbers of both sides had left their trenches, unarmed, and met in the debatable, shot-riddled, no man’s land between the lines. Here the agreement – all on their own – came to be made that we should not fire at each other until after midnight tonight. The men were all fraternizing in the middle (we naturally did not allow them too close to our line) and swapped cigarettes and lies in the utmost good fellowship. Not a shot was fired. “

The famous Christmas Truce of The Great War–was unofficial and the consequences were dire. Soldiers on both sides are reprimanded and punished for fraternizing with the enemy and headquarters on both sides took strong steps to ensure that it could never happen again. While it lasted, though, the truce was magical.

In most places, up and down the line, it was accepted that the truce would be purely temporary. Men returned to their trenches “Today we have peace. Tomorrow, you fight for your country, I fight for mine.

The next day the war was on again, and there would be no further truce until the general armistice of November 1918. Sadly, many of the thousands of men who celebrated Christmas 1914 together would not live to see the return of peace. But for those who did survive, the truce was something that would never be forgotten.

Many thanks to Bill Bader, Kavan Stull, Paula Callihan and Mary Anne Phillips for loaning precious items from their collections including, original war uniforms, vintage opera gown and WWI memorabilia to make the holiday window truce scene more authentic.  Also, many thanks to The Ellis Sisters for attending the window unveiling in period Red Cross and nurses’ uniform for an historical reenactment presentation for our guests.