His home is fashioned after the castle-like fortification housed along the Rhine Valley. The battlement topped tower. He brought workers from Germany to create terra cotta friezes; notice hops vines in the friezes

On October 20, 1915, Charles’s wife, Wilhelmina (Mina) died at their home at 422 Sergeant from Breast Cancer. She was ill for 18 months. Only ten days later Charles passed away in his home.

Charles, Wilhelmina, infant son and family members are interred at Mount Hope Cemetery.  His mausoleum is interesting because it is in the Egyptian revival Style.

When Schifferdecker died October 30, 1915, the entire city shut down for his funeral. A generous philanthropist, he once stated that he wished he knew when he would die so he could give away all his fortune and die penniless. 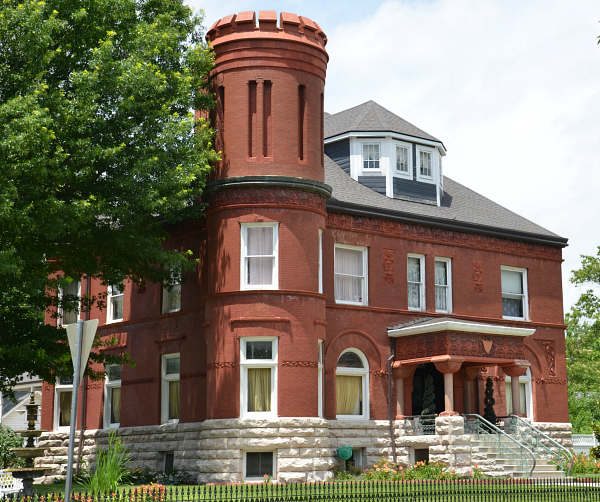 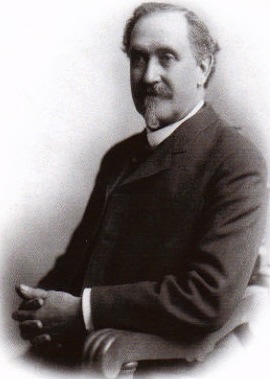 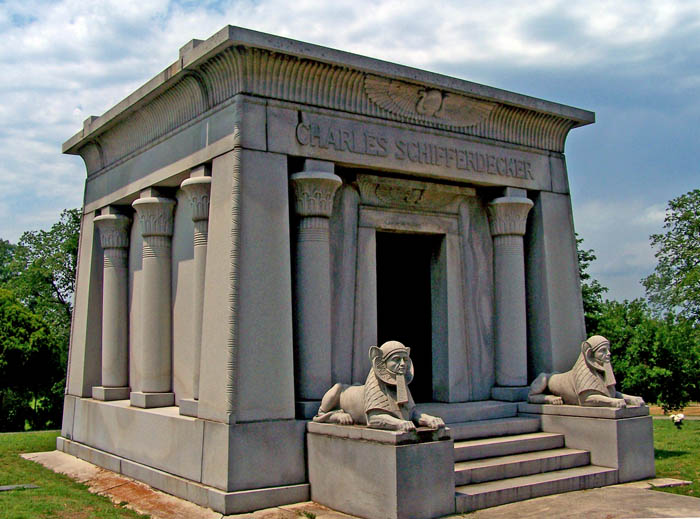 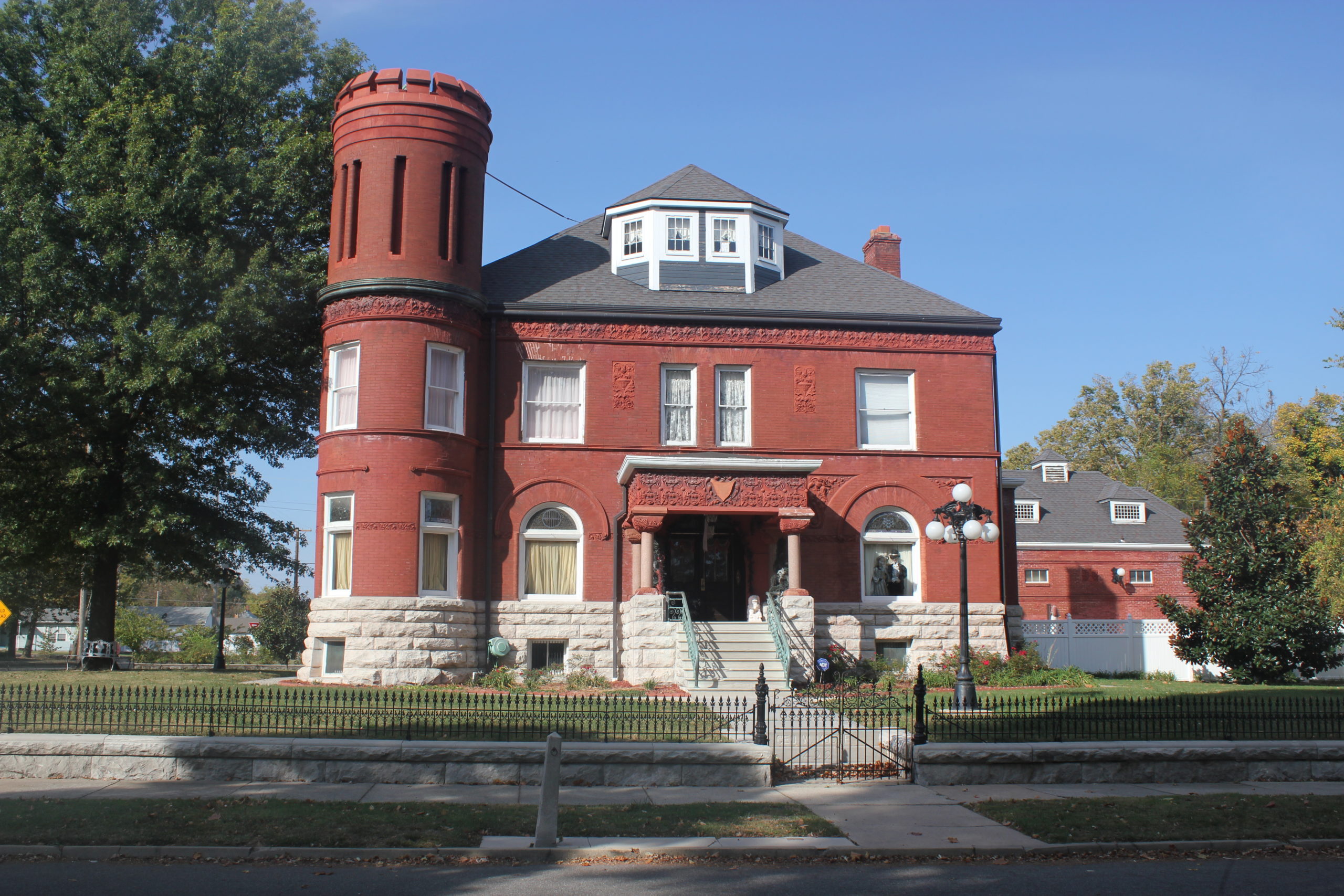 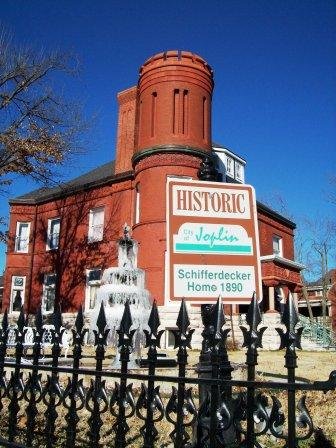 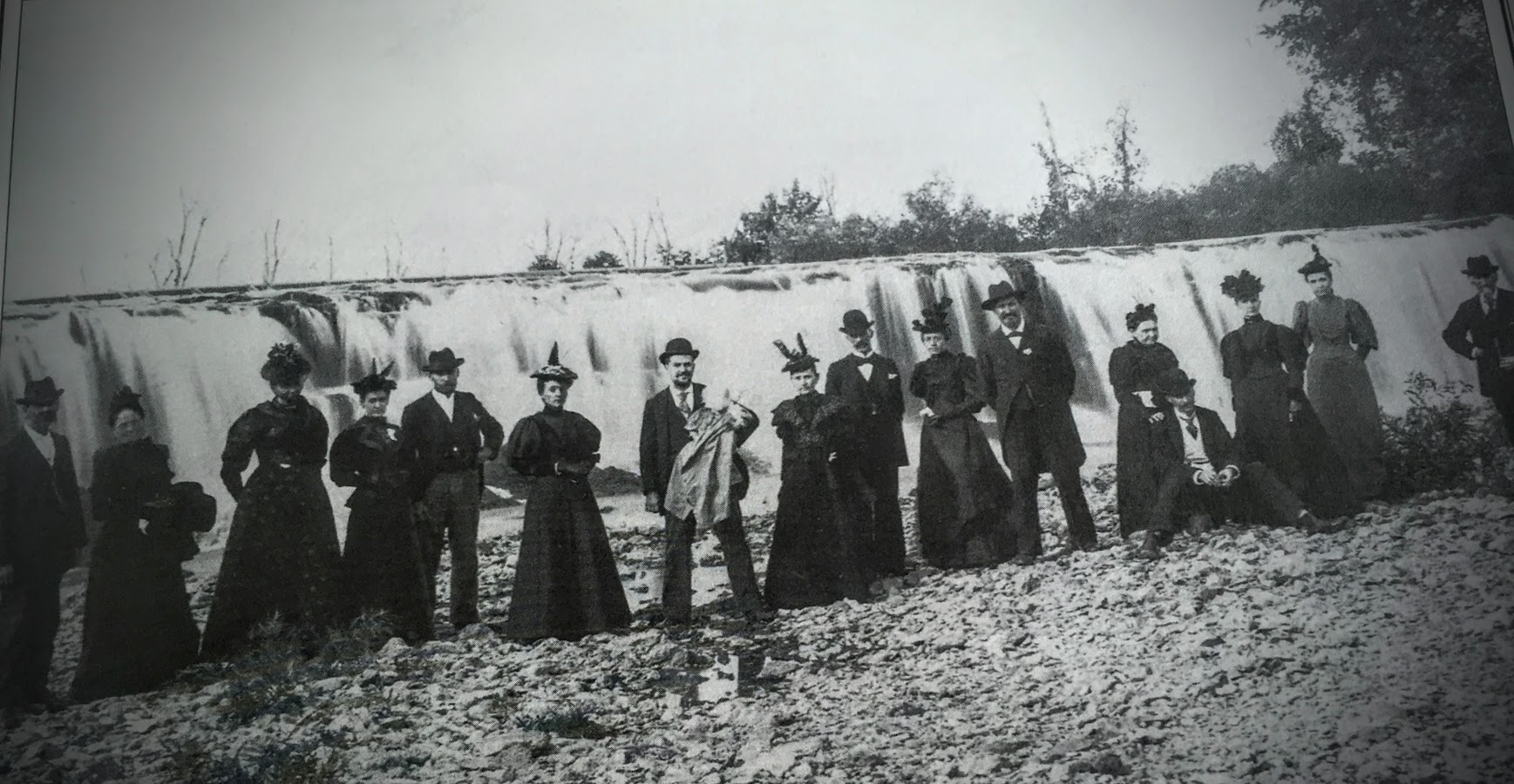 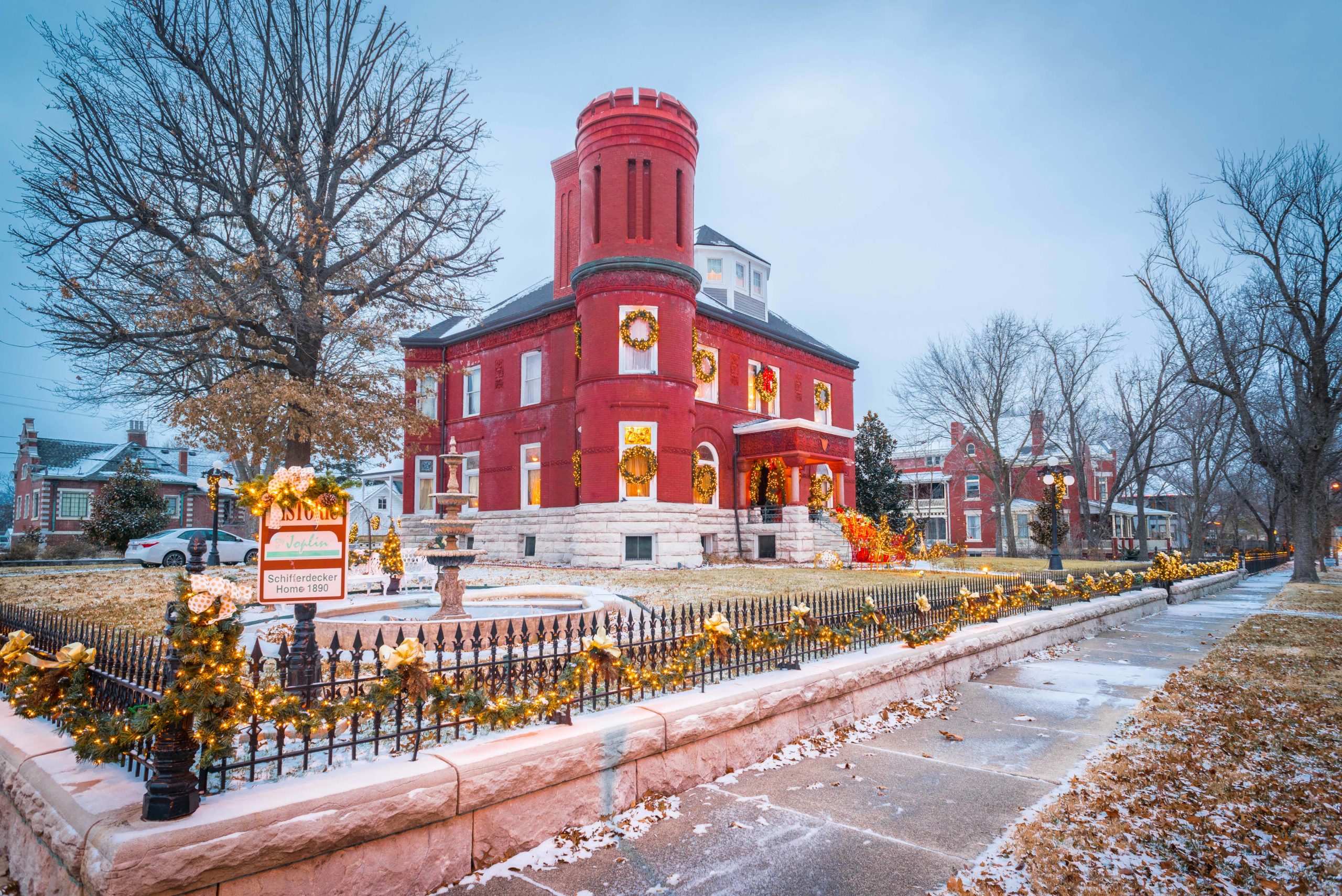 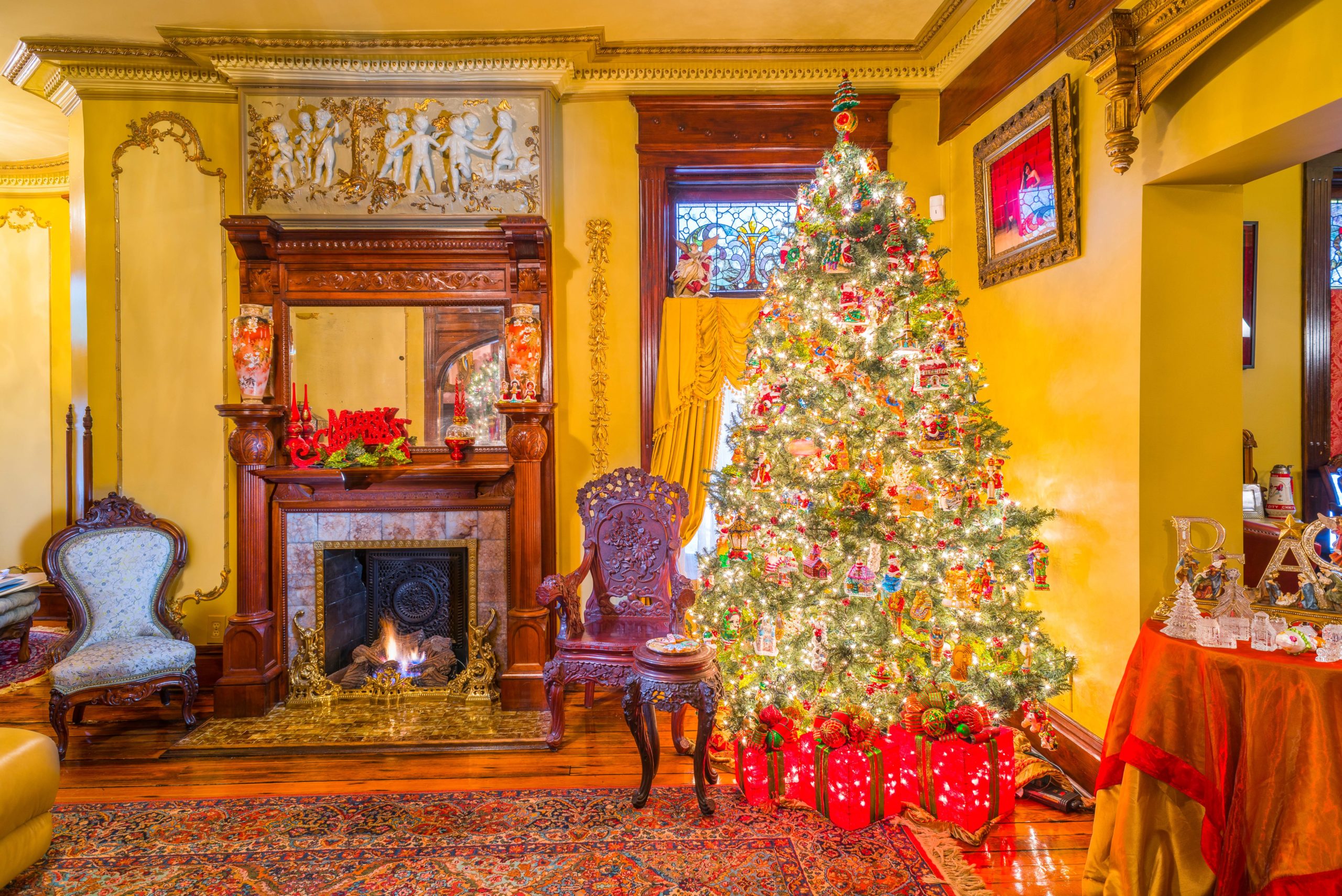 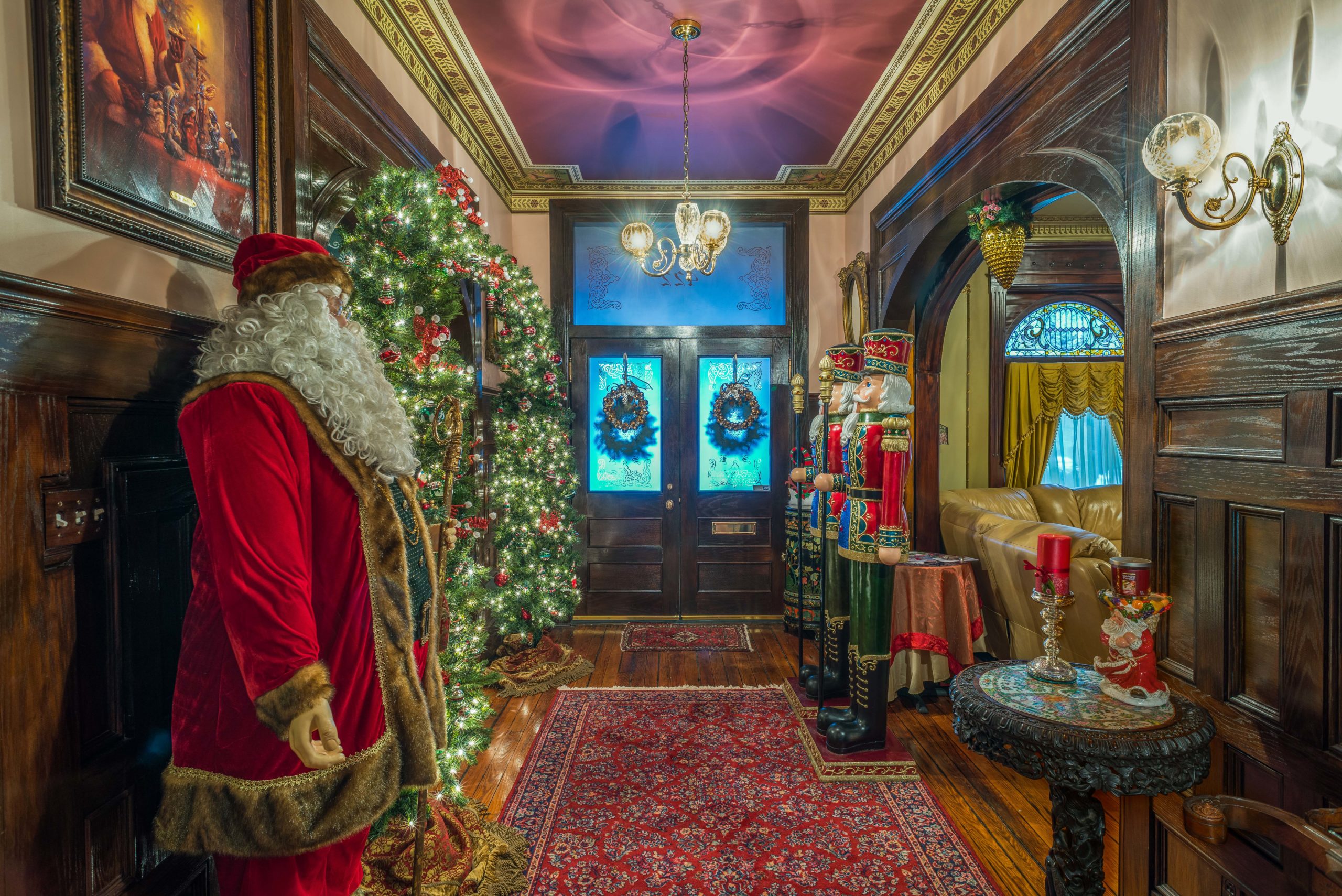 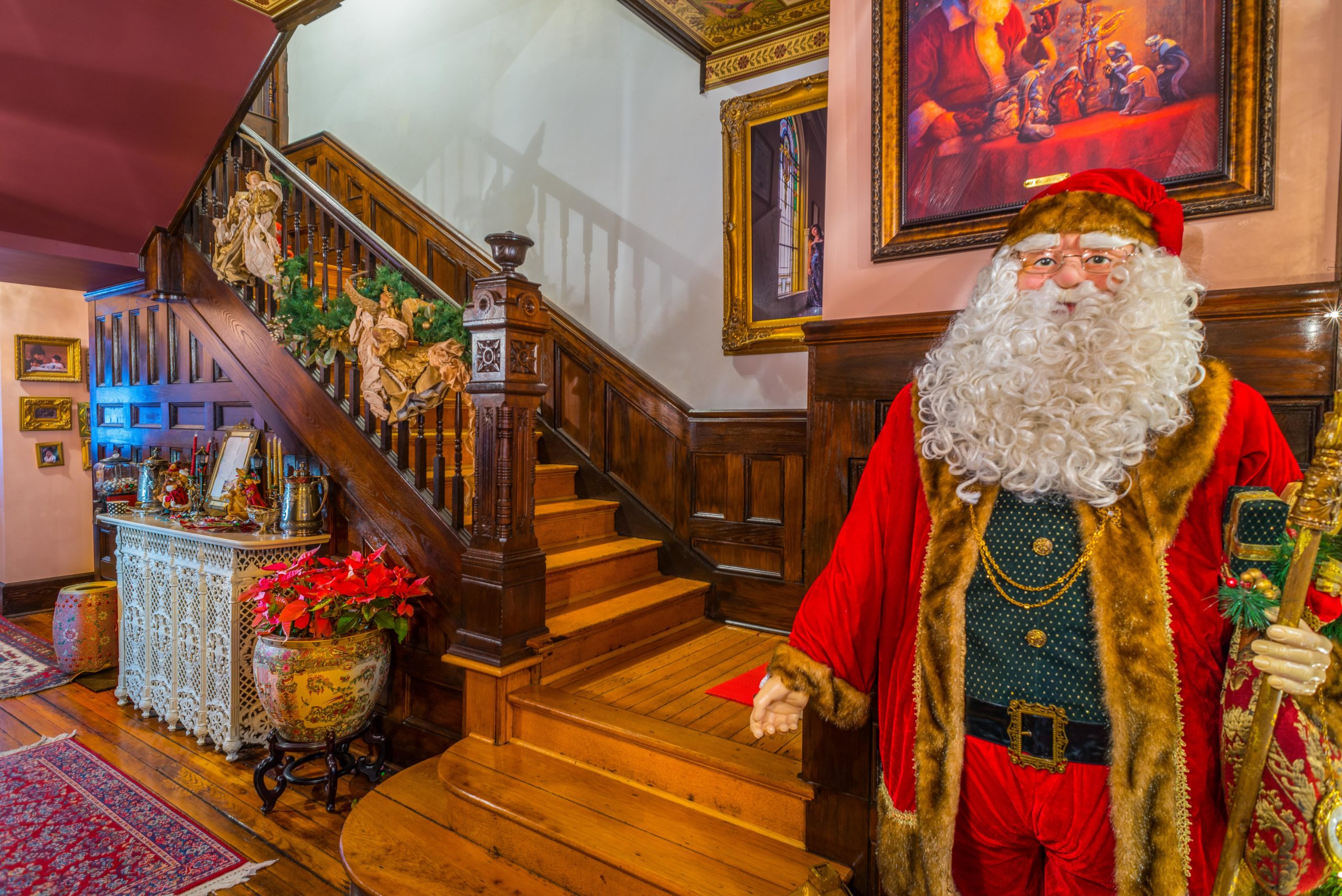 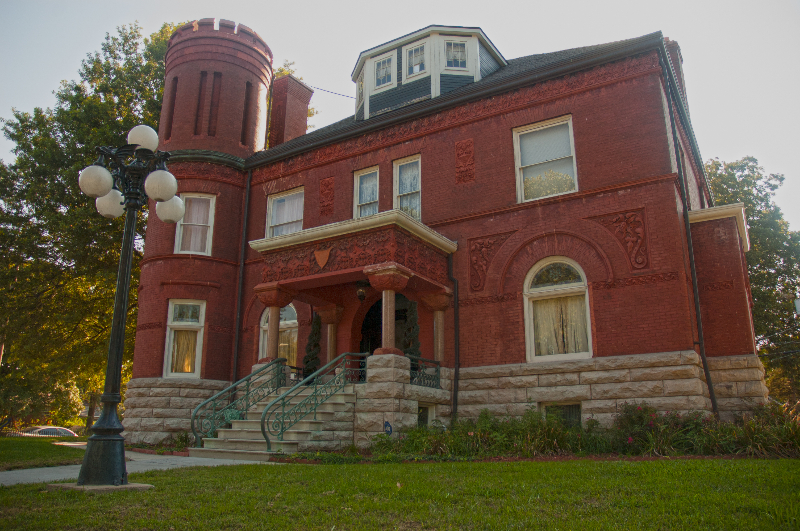 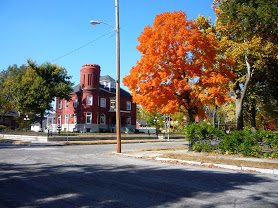 Charles Schifferdecker was the proverbial “self-made man.” In 1869, the poor 18-year-old left his family home in Baden, Germany to seek a better life in America. He started out in the brewing business in Joplin. Though his career in brewing was successful, young Charles made his fortune in mining and banking ventures. By 1887, the wealthy businessman even went to the White House for a private audience with President Grover Cleveland. He followed the same business at Baxter Springs, Kansas, during the early part of 1875, removing later that year to Joplin, Missouri, where he established a bottling and ice business, which he made one of the leading enterprises of the city. This he sold in 1888 to the senior George H. Redelland and son, George H. Redell.

The name of Charles Schifferdecker lives on in the park that bears his name. In 1922, Joplin Mayor Taylor Snapp paid tribute to the man whose gift of a fine park to the City had “gladdened thousands of hearts.” Yet this was not the first park to bear his name. In 1876, the German entrepreneur had purchased acreage on Turkey Creek east of Joplin, where he operated Turkey Creek Brewery. He opened Schifferdecker Gardens, a beautiful natural park, where people came to picnic and to enjoy the lush surroundings.  Schifferdecker Gardens opened July 4, 1876 hundreds of people gather for the celebration.  The gardens feature a raised platform for dancing, bowling lanes cut into the meadow. They could also quaff some of Schifferdecker’s beer, brewed from natural spring water and cooled in nearby caves, where the temperature stays below fifty degrees.

The Sunken Garden of the second Schifferdecker Park reflects back to the serene beauty of the Schifferdecker Gardens on Turkey Creek. The well-kept Schifferdecker gardens brought grace and beauty into the lives of folks discouraged by war and tough economic times. Brothers Matt and Kit Vickery maintained the manicured lawns and elegant floral beds. People flocked to Schifferdecker Park, not just to stroll through the flower garden, have picnics, or listen to concerts, but also to watch the animals.

Over 12,000 attended the Electric Park’s grand opening on June 10, 1909. This was the largest crowd that had ever gathered in the district. Twenty railroad cars transported them to and from the “Coney Island of the Missouri-Kansas mining district” as the Joplin Globe called it. The park spread over approximately four city blocks, from 4th to 6th Streets, Park View to Schifferdecker Avenues.

Just ten years previously, this exotic site had been a rustic old dairy farm. Charles Schifferdecker purchased the land and leased ten acres to three businessmen, who constructed an amusement park — the Electric Park, so-named because of the 40,000 incandescent bulbs installed on its structures. The Electric Park, which cost $150,000 to build, featured rides, sideshows, animal exhibits, musical performances, concessions, and souvenir stands. The 4th Street entrance arches to Schifferdecker Electric Park spanned a width of 132 feet. Other amenities included a skating rink, boating lagoon, and swimming pool. The “German Village” beer garden paid tribute to the park’s namesake Charles Schifferdecker, a German native who began his career in the brewing trade. Although built two miles west of downtown, the Electric Park was easily accessible, by means of the double track trolley line constructed by the Joplin and Pittsburg Railway Company.

Charles Schifferdecker had leased the Electric Park to the Joplin and Pittsburg Railway Company, but in 1913 he took back his claim, then deeded 40 acres of it to the City of Joplin. He stipulated that it be used perpetually as a free public park. By August 1914, the City had assumed total operation of Schifferdecker Park, which became the fourth park integrated into the City’s park system. The City tore down the tower and the amusement rides. It also made improvements to the dance hall and swimming pool and installed playground equipment and a baseball diamond.