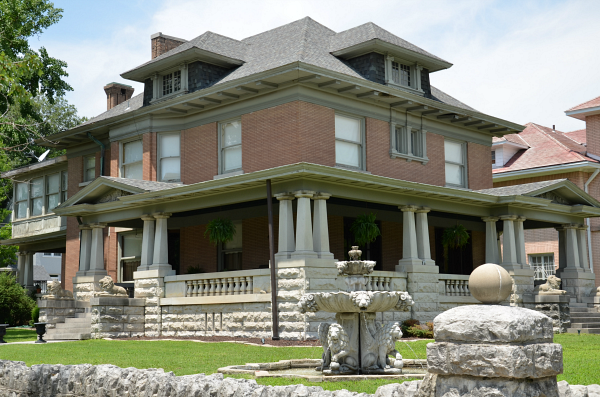 Henry H. McNeal was at the head of one of the important manufacturing industries that lend commercial precedence to the city of Joplin during the late 1800’s and early 1900’s

He was with a leading contractor and builder who was at that time engaged in the erection of several large buildings in Kansas City and who was also the owner of a zinc mine at Joplin. This honored employer, F. M. Sharpe, came to Joplin in 1890, to supervise the operation of his mine, and he made Mr. McNeal manager of the property, thus showing his appreciation of the latter’s ability and fidelity. Mr. McNeal retained this incumbency until 1898 and in the meanwhile he gained a thorough knowledge of the mining business and the accessories utilized in the connection. Thus, he became impressed with the idea that there was an excellent opportunity to engage in the manufacturing of mining machinery at Joplin, he organized the firm of McNeal & Company, which forthwith instituted the manufacturing of such machinery, with a well-equipped repair department. The venture proved successful from the beginning and it rapidly expanded in scope and importance. In September 1905 to facilitate operations and extend the scope of the business, a reorganization was effected, by the incorporation of the McNeal Machinery Company, of which Mr. McNeal became president and general manager. His former employer, Mr. Sharp was vice-president of the company until his death. In 1910, an important addition was made to the business controlled by the McNeal Machinery Company, which title was adopted in 1905. In June 1910, Mr. McNeal purchased American Pump Company, of Joplin, and the plant was absorbed by the McNeal Machinery Company.  The plant of the McNeal Machinery Company was one of the largest and best equipped of its kind in the southwest and the business constantly expanded in all departments. Mr. McNeal was held in high esteem in his home community and gained distinctive success through his efforts, which have given him precedence as one of the leading business men of Jasper county. Mr. McNeal was also vice president of the Conqueror Trust Company, one of the important financial concerns of Joplin, and is treasurer of the Stewart Lumber Company, in which he had the controlling interest. He advanced through the various degrees of both York and Scottish Rite Masonry, in which latter he has attained to the thirty-second degree, and he is also identified with other fraternal and social organizations of representative character.

In the year 1889 Mr. McNeal was united in marriage to Miss Mary Heinz, who was born and reared in the state of Illinois, and they had two daughters, Lorena and Helen. Mrs. McNeal and her daughters were valued factors about the leading social activities of Joplin and the family home was a center of gracious hospitality.