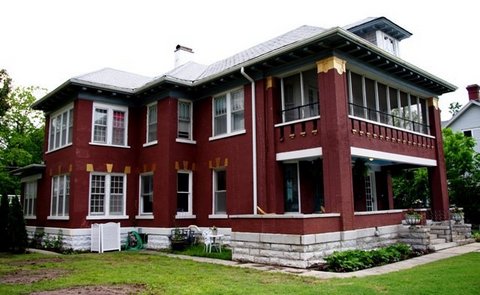 Many early and prominent Joplin men could lay claim to the “rags to riches” story. Jesse Starr was one such man.  His grit and determination carried him from the Lanyon Smelting Company in Kansas where he began working in 1876, at the age of fifteen, to the Lanyon-Starr Smelting Company that he organized in 1897.

Success continued to follow and in 1905, he organized the Conqueror Trust Company with William Houk, John Gmeiner, and Julius Becker.  He served as the company’s vice-president.

Starr hired Garstang and Rea to design his Colonial Revival style house. It was completed sometime around 1903.  The classic details on this home were a perfect example of what appeared on many homes built in the early part of the twentieth century.  The heavily detailed cornices on the roof and porch are decorated with modillions.  Other interesting features were the upper porch balustrades and upper-story bay window.

In 1936, Starr hired A.S. Greenwell to modify the structure.  He created a duplex with one apartment on the upper story and one on the lower. The upper-story bay window and modillions are the few remaining details of the original design.

Some of the many examples of Art Glass of Murphysburg 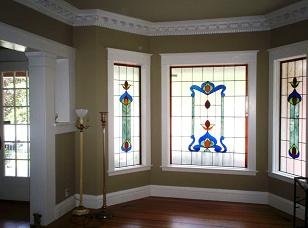