Take one of our Walking Tours!

THE HISTORIC ROUTE 66 HIGHWAY AND BYWAY makes many twists and turns as it winds through JOPLIN. Taking the “Mother Road” south on Main Street and following it west onto Seventh Street, travelers need only head north on Sergeant Avenue or Moffet Avenue to find the: 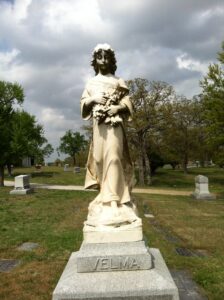 The cemetery’s original tract consisted of 77 acres of farmland. “The Mount Hope Cemetery Association” was officially incorporated on April 12, 1905. The purpose of the corporation was to establish a park-like cemetery by laying out and subdividing tracks of land into cemetery lots and to preserve and maintain the cemetery in perpetuity. Eleven business men in Joplin and Webb City with mining ties funded the corporation with capital stock valued at $30,000.

The cemetery was designed in 1905 by Sid Hare, an engineer, urban planner, and landscape architect. Eventually his son joined him and they went on to assist in the design of the Kansas City Country Club Plaza and Nelson-Atkins Museum of Art, and many other projects.

Classical Style Investigation: You will be investigating several different style homes, and your objective is to uncover certain classical elements that can be found on these structures.