Olivia was born on December 11, 1910 in Ohio, but soon came to live with her parents, Annie and Fred Bendelari at the Olivia Apartments.  It must have been a constant source of pride and need for explanation for the young Olivia to live at the Olivia that was named for her grandmother, “Minnie” Mary Olivia.  Her uncle, Arthur Bendelari also lived at the Olivia and had it built in 1906.  Her father and uncle were associated with the Consolidated Mining Company and Eagle Picher Lead Company, respectively.

One of her many Civic Activities in Joplin included the Women’s Club.  In February 1935 she was one of seven models at “A Dressmaking Show” at Christman’s in Joplin.  The dresses were “… made by dressmakers who were on ‘relief,’ but who are endeavoring to secure dressmaking employment at a most reasonable figure.” 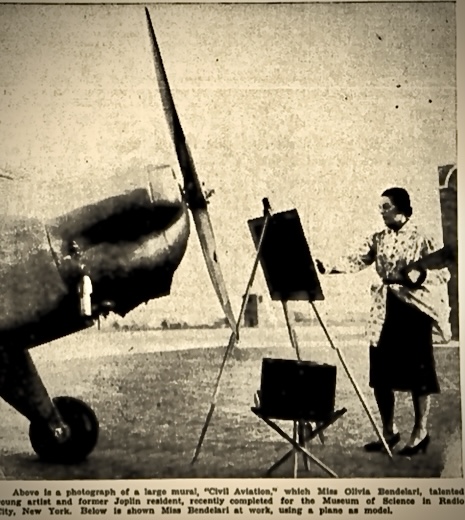 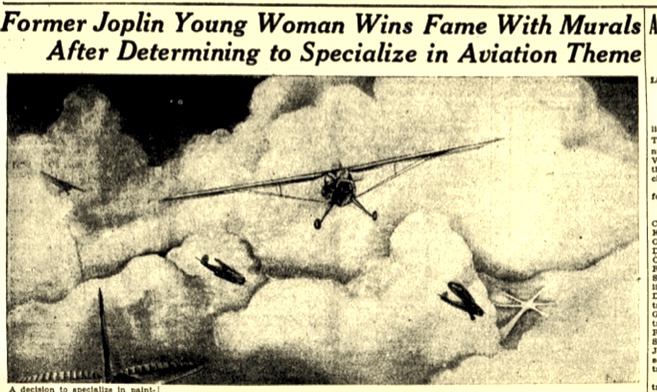 While working in Kansas City, she was considered an “internationally known portrait painter” and executed life-size portrait sketches at the Sarachek Studio for $15.

Olivia Becomes Interested in Aviation both as a student pilot, and as an artist.  It helped that her sister, Helen and brother-in-law owned planes that Olivia used as models for her painting.  Helen was also a student pilot.

Following are some of her paintings and installations:

In 1939, Olivia’s exhibits were at the College Park Airport in Maryland and the Aircraft Building of the Smithsonian Institution.  Her 27 watercolors and a photo portrayed various types of army, navy, and commercial aircrafts in flight.  Planes in action included bombers, attack planes, pursuit planes, transports, etc.  At the time, she was believed to be the only female artist specializing in aviation themes.

Olivia Marries a Naval Aviator – In 1940, Olivia married Woodward Burke.  Tragically, she was widowed just five years later when Mr. Burke was killed in a plane crash while test flying a new plane at Lambert Field in St. Louis.  She later marries Mr. Alex Stein in 1957 and the couple made their home in Los Angeles.  It is believed that Olivia had no children.  She passed away in L.A. on February 22, 1996 at age 86.