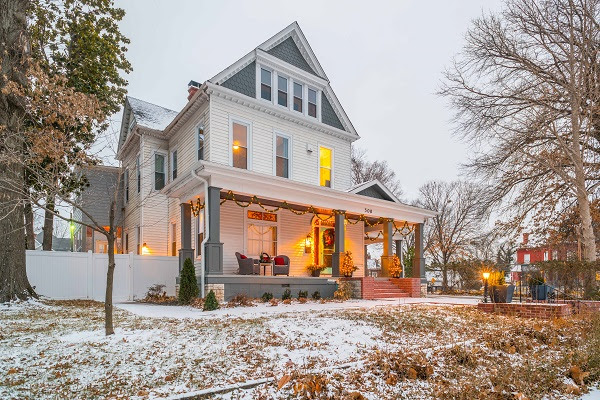 Architect W. B. Rees
Henry’s wife, Matilda planned the design of the house

Portions of Mr. Weymann’s Death Notice: To the Fatherland (Germany) is Joplin indebted for one of her representative citizens, Henry Weymann. One of the most progressive and enterprising men identified with the local mining industry and one who has the distinction of having been connected with the operation of the first zinc smelter built west of the Mississippi River and of shipping the first car load of zinc ore from the mines west of the Mississippi River to the smelter.

When his home was built, it contained some of the modern conveniences such as speaking tubes and a central vacuum system.

His mining crew discovered the Crystal Cave at Fourth and Gray. It is reported to have the largest calcite crystal ever found in the United States. It is now entombed in water.

The house is an example of the Free Classic subtype of the Queen Annestyle. The structure  includes small round modillions and a side-wrap porch that continues north as a porte cochére. Look up to see fish scale shingles, and then focus below on the tapered square wood columns and an arched stained glass transom at the front porch. The current façade dates to circa 1935. The north side of the home features an asymmetric multi-segmented arched stained-glass window that overlooks the entrance hall and stair landing, in which the unusual window lets in soft light. The elements of design in the window depict a Tree of Life.